What is political leadership? Simple as this question seems, it is one that the current crop of political leaders are unlikely to answer convincingly. What does it actually mean to lead? How do you practically do it?

Paul Keating had an answer. Love him or loathe him, he had a vision of leadership that he relentlessly pursued. This is the subject of Troy Bramston’s recent biography, Paul Keating: The Big-Picture Leader. Simultaneously a narrative of Keating’s life and an exploration of leadership, it is a welcome contribution that utilises recent history and a biographical frame to consider the meaning of leadership.

Bramston is the first biographer of Keating to receive his blessing and co-operation. The former Prime Minister did agree to a series of interviews with Kerry O’Brien for the ABC that were later published, but has been obstinate in his refusals to work with others. Direct access to Keating and his records was clearly a burden as well as a benefit for Bramston.

There is a telling moment late in the book when Bramston refers to Keating’s falling-out with former speechwriter Don Watson, after the latter’s account of Keating’s office Recollections of a Bleeding Heart. Listening to Keating’s evisceration of Watson was, Bramston relates, ‘enough to make any prospective biographer tremble with fear.’ He need not worry – there is little here to stoke Keating’s ire. 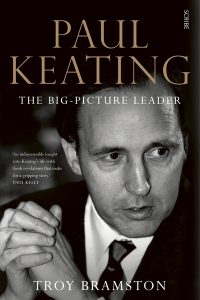 Bramston sticks to Keating’s own narrative from his ABC interviews, and the former prime minister’s reflections are often presented as the last word on contentious issues. Bramston frequently draws attention to his privileged status as an interviewer of Keating, gleefully relating this intimate connection in a manner that raises questions as to his distance from his subject rather than indicating a form of knowledge that only he can provide.

It is powerfully argued that political leadership requires painting on a large canvas, and a commitment to a future beyond the next election.

But this book posits itself as an exploration of leadership, and it is on this that it should be judged. Bramston closely mirrors Keating’s argument as to the nature of leadership, and is particularly positive towards the prime ministerial years of 1991 to 1996. In this period, he argues, Keating’s ‘Big Picture’, defined by the three tenets of Aboriginal rights, Asian engagement, and the Republic, can best be identified. It is notable that despite arguing Keating’s economic record as PM has been underappreciated, Bramston does not include it as a core tenet.

There are positives to this discussion, and it is powerfully argued that political leadership requires painting on a large canvas, and a commitment to a future beyond the next election. Politics and the exigencies of maintaining power is important, but this is built upon good policy: if you educate the electorate and offer them a convincing explanation of where you are going, they will go with you. But there is something shallow in Bramston’s discussion of what led Keating to show this sort of leadership, and how he did it. It would seem that Keating was able to be this sort of leader, well, because he was.

This presentation contrasts with that of another biographer, Robert Caro, who has spent the past four decades writing his series on President Lyndon Johnson. Bramston invokes Caro’s famous argument: ‘Power reveals’ in his introduction. Ultimately, politics and leadership are all about power: having power, and doing something with it. The strength of Caro’s work is he contextualises Johnson’s pursuit of power – and rare genius with its utilisation – with a detailed analysis of the institutions of power through which it was deployed. He does not just tell the reader what Johnson did, he explains how he did it. Caro tries, as much as possible, to put the reader in the room with Johnson.

Large swathes of this text tell you what Keating did, but rarely how.

Bramston is too preoccupied with being in the room with Keating to worry about putting the reader there. Large swathes of this text tell you what Keating did, but rarely how. We predominantly receive brief sketches of a supporting cast, and of institutions of note. A more developed understanding of the systems of power in which Keating operated – and the relationship of individuals to institutions – is largely missing.

This is notable in the relationship between parliament, the public service, the unions, business, and the ALP. Keating stood at the nexus of these groups, and the key to understanding his power is to appreciate how he negotiated their interests, and was able within this to find a means to extract what he wanted from them. Such understanding is replaced by brief sketches in a cataloguing of policy reforms that detailed what happened, not how. In place of such description is often a series of quotes attesting to Keating’s prowess (many not from Keating himself) rather than description (Bramston’s fascinating narration of the Native Title legislation is one exception to this trend).

This can be seen in his discussion of the financial reforms of 1984. Bramston states that Keating put an argument to Labor’s national conference to allow the entry of foreign banks and provides a few scattered quotes to indicate the terms of that argument. We are told there was a ‘protracted debate’ and eventually the conference endorsed a series of financial reforms including the entry of the banks. But what was at stake? What were the terms of the argument? Precisely how did Keating argue and against what?

The conclusion to draw is that Keating was so persuasive that he was able to get his way – but without understanding who the opposition was and how they sought to resist this move.

Bramston’s starting point of agreement with Keating means he does not seem to see a need to even consider what the terms of opposition were, let alone the figures associated with it. The conclusion to draw is that Keating was so persuasive that he was able to get his way – but without understanding who the opposition was and how they sought to resist this move (what the powers and significance of the national conference were, for example) the actual means through which Keating negotiated the operations of power are obscured

This politics-light is frequently entertaining, but seldom satisfying for anyone seeking answers as to the practical operations of political leadership. This relatively shallow understanding of leadership and power, accompanied by Bramston’s overt support for Keating, also blunts the analytical edge, and his ability to understand the implications of Keating’s career for politics today. The transformation of politics and the economy under Keating were profound, and challenging. Ultimately, this led to Keating’s defeat at the election in 1996 to John Howard, the anti-Keating.

Reading Bramston’s work in the wake of Trump’s election, I was struck by a vignette from 1995 when Keating dismissed the concerns expressed by callers on the John Laws radio show that after the hardship of reform and the recession of the early 1990s there was still no improvement in their lives. Keating replied: ‘I mean, what are people going on about?’ Howard successfully presented Keating as out of touch, concerned more with the interests of the ‘minority’ groups than the ‘battlers’. The implications of this for political leaders, particularly those on the centre-left, are worth exploring further.
But to do so requires a consideration of the deficiencies of Keating’s leadership, as well as its positives.

Leadership is the capacity to utilise power to attain an end, and this cannot be done without an appreciation of the systems and institutions that underlie that power. Keating’s genius was in understanding this, and ruthlessly utilising them to attain his ends. Many of these were positive. Keating supporters, such as myself, would say the majority were so. But to understand how this form of leadership was demonstrated, as well as how it could be developed again, requires an appreciation of its operations and limitations. Without this, we only have a small view of the bigger picture.

Paul Keating: The Big Picture Leader by Troy Bramston is published by Penguin

Liam Byrne is completing a PhD on Labor’s political culture, and have been published in The Age and for Overland, as well as in various academic publications.