Forty years ago I moved from northwest Oregon to San Francisco to study dramatic theory and criticism at San Francisco State University. I settled into a one-room basement apartment in a private residence in the city’s Sunset District, at the corner of 23rd Avenue and Noriega Street.

The Sunset in 1976 was a quiet, quasi-suburban area. More than two years earlier, though, on April 15, 1974, the neighbourhood had been the focus of headlines worldwide when the Hibernia Bank branch at 22nd and Noriega was robbed by members of the Symbionese Liberation Army (SLA).

Captured on security cameras were images of Patricia Hearst, granddaughter of publishing titan William Randolph Hearst, cradling a semi-automatic weapon. “Patty” (she hated the nickname) had been kidnapped from the Berkeley apartment she shared with her boyfriend in February of that year. Weeks later she shocked the world by allying herself with her captors and taking the name “Tania,” in tribute to a guerrilla who had fought alongside Che Guevara.

Things for me in those early weeks in San Francisco were challenging, lonely and dull. But if I wanted to impress folks back home that my life in SF was all glamorous excitement, I could always play the SLA card: “I live right down the street from the bank that Patty Hearst robbed!”

The Hearst case is nothing if not great raw material for storytelling. Small wonder that journalist Jeffrey Toobin would want to research and write about it. His new book, American Heiress: The Wild Saga of the Kidnapping, Crimes and Trial of Patty Hearst, gives the tale a dramatic, often absorbing rendering. An earlier book of Toobin’s, The Run of His Life, became the popular FX television series The People v. O.J. Simpson. If American Heiress doesn’t get a similar filmed adaptation, I’ll be greatly surprised. (The story was previously dramatised in Patty Hearst, a 1988 feature directed by Paul Schrader, starring the late Natasha Richardson.)

Despite its rhetoric the SLA was not a vehicle for social or political change; it was a spectacle. In other words, it was showbiz.

Toobin begins the tale in medias res, with the sound of the doorbell in Berkeley announcing the arrival of the kidnappers. Then, quickly and efficiently, he fills readers in on all the backstory elements they’ll need to know. The narrative progresses at a fast clip and wraps up in under 350 pages. It’s admirably skillful and efficient storytelling. Still, it seems at times that the major players in the case did much of Toobin’s work for him. SLA members had a talent for the dramatic that can make readers feel, at moments, as if a master of fictional suspense crafted the entire yarn.

Some elements in the story seem, in fact, to hearken back to antiquity. A final piece of evidence that cinched Hearst’s conviction involved a pair of matching charms shaped like monkeys. They linked her romantically with Willy Wolfe (aka “Cujo”), one of her abductors. This plot turn could have been lifted from the final scenes of a comic play by Terence or Plautus, if only it resulted in a happy ending. Puzzling over the question of why, exactly, Hearst became Tania, can be a little like pondering what went through the mind of Helen of Troy after the Trojans carried her away from Greece. When I first heard about the SLA back in 1974, I — like many people — had an impression that they were a large, well-organised force. This was anything but true. As Toobin makes clear, the SLA was a very small band of misfits with murky revolutionary ideals and unconvincing credentials. They were led by a man — Donald De Freeze (aka “Cinque”) — with delusions of grandeur and an addiction to plum wine.

A number of SLA members had previously explored an interest in literary or performance arts. Camilla Hall (“Gabi”) was a poet. Bill Harris (“Teko”) and (especially) Angela Atwood (“General Gelina”) had theatre backgrounds. While at Indiana University, Atwood had assisted a fellow student named Kevin Kline — yes, the future Tony- and Oscar-winner — who ran a guerrilla theatre group that performed at a local coffeehouse. That the SLA’s activities were at times more like performance art than urban warfare is underscored by the author:

Despite the rhetoric of [their] communiqués, the SLA was not a vehicle for social or political change; it was a spectacle, an instrument for getting attention for its own sake. In other words, it was showbiz — albeit of a highly destructive (and self-destructive) sort.

Hearst had no experience on the stage, but she would probably have been a natural in the world of improvisational theatre.

Even at their most desperate moments, SLA members indulged in theatrics. When they abandoned one hideout, they soaked papers and keys in a bathtub filled with dangerous chemicals. Nearby they left a note for Charles Bates of the FBI, noting that there were “additional juicy SLA clues” on the premises, but implying there might also be booby traps. “Happy hunting, Charles!” the taunt concluded, sounding a little like it was written by a flamboyant villain from TV’s Batman.

Toobin writes that Patricia Hearst had a gift for shaping “the perception of reality, if not reality itself”. He argues that SLA members were too disorganised to have “brainwashed” Hearst. He believes she was a quick-thinking young woman who could shift allegiances speedily and with surprising fervor.

In Every Secret Thing, her 1981 memoir, she described her stint as a revolutionary soldier for the SLA as “a role I had accepted in exchange for my very life”.As Hearst came to believe that her parents had abandoned her and that the authorities wanted to harm her, she went about perfecting her performance. Unlike Atwood, however, she had no experience on the stage, but she would probably have been a natural in the world of improvisational theatre. She had the requisite ability to say “yes” to her scene partner, to pick up necessary cues and to commit fully to her actions in any given situation.

Did she really believe in what she was doing? Well, the title of a popular textbook for thespians, first published in 1955 and now in its 12th printing, is Acting Is Believing.

Toobin might have chosen to relate the whole SLA saga with the breeziness of a cinematic caper had it not been so deadly. When all was said and done, the group was responsible for two murders — one before the Hearst kidnapping, one during the commission of a 1975 robbery in which Hearst drove the getaway van. In addition to these killings, six members of the SLA (including DeFreeze, Wolfe and Atwood) died in flames in a confrontation with police in Los Angeles on May 17, 1974.

Hearst served only a fraction of her seven-year sentence for her part in the Hibernia Bank robbery, but she made a deal with prosecutors that granted her immunity in the (capital) case involving the later bank robbery and murder. Her sentence was commuted by President Carter in 1979. By then, she was said to be “rehabilitated”. Or, at any rate, she had long since abandoned her role of urban guerrilla and seemed ready to accept a gig as the wife to her bodyguard, named (I’m not kidding) Bernard Shaw.

Later, and ironically, Hearst entered show business for real. When cult filmmaker John Waters signed her to appear in Cry-Baby in 1990, there were no previous titles in her official filmography. But she definitely had a few stunning performances already under her belt.

This article was first published by The Clyde Fitch Report, a US arts and politics website in partnership with Daily Review. 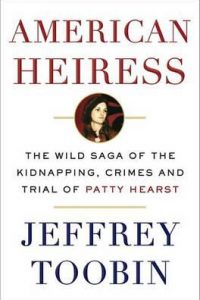 Mark Dundas Wood is a writer and dramaturg in New York and a regular contributor to StageBuddy.com and BistroAwards.com. His features and reviews have also appeared in Back Stage, American Theatre and The Oregonian. Fiction credits include Oregon Literary Review and Northwest Magazine. His adaptation of Henry James’s novel 'The Tragic Muse' appeared at the Metropolitan Playhouse. As literary manager for New Professional Theatre, Mark has worked with such playwrights as Katori Hall and Colman Domingo. He has served as a dramaturg for the New York Musical Theatre Festival annually since 2009.

One response to “‘American Heiress’: Was Patty Hearst less a terrorist and more a performance artist?”