There was a great disturbance in the force when it was announced there was going to be a new Mary Poppins movie. Messing with such a beloved classic that’s stood the test of time and entertained youngsters and their parents since its 1964 release was always going to be risky.

The big question was, how do you do it? Do you play the nostalgia card and try to capture the innocent magic of the original, or do you give it a 21st century flavour and possibly alienate old fans? And kids post-Harry Potter – not to mention Nanny McPhee – have seen so much magic on screens that another major issue was how do you thrill them these days? When people saw Mary Poppins, Bert and the Banks children jump into a painting and suddenly be transported into a 2-D cartoon world back in 1964, it was something special.

So, how does Mary Poppins Returns stand up in 2018-19? Pretty well, all in all. The Rob Marshall-directed film stays faithful to the spirit of the original, right up to even having a theatrical musical number to match most of the well-loved ones of the Julie Andrews version. Some of them are winners but Trip the Light Fantastic, which tries to emulate the exhilarating Step in Time by the chimney sweeps on the London rooftops, doesn’t quite cut it. And do the Marc Shaiman-penned melodies have that instant singability of the Sherman Brothers’ Jolly Holiday, Chim Chim Cheree or Super-Cali-Fragil-Istic-Expi-Ali-Docious? Sadly not. And that’s one of the main areas that really needed to be spectacular. I can’t remember one single melody from the movie. That’s not to say there aren’t some great show-stopping sequences (including a charming one with similar 1960s-style 2-D animation) but the bar has been set extremely high.

Then there’s Mary Poppins herself. Emily Blunt was an inspired choice as the stern but ultimately kind-hearted nanny who floats down from the sky into the home and hearts of the Banks family, and Blunt certainly has a lovely singing voice. As her Bert-like friend, there’s Jack the lamplighter, played by Hamilton’s Lin-Manuel Miranda – an amicable type who doesn’t carry a torch for Ms Poppins in the same way Bert seemed to, but who’s more interested in the now adult Jane, played by Emily Mortimer. Miranda has great screen appeal and manages a slightly better cockney accent than Dick Van Dyke did. 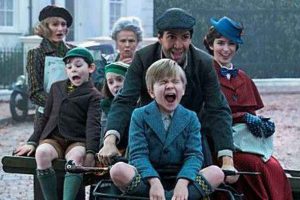 The plot, based partly on P.L Travers’ books and the first movie, is set a few decades after the original, in Depression-era London. Michael Banks, now played by Ben Whishaw (A Very English Scandal, and the voice of Paddington), still lives in the family home featured in the original but he’s recently widowed and has three young children – John (Nathanael Saleh), Annabel (Pixie Davies) and little Georgie (Joel Dawson). Michael’s sister, Jane, has taken on her mother’s activist mantle and is a union organiser. When the family learns the terrible news that the grieving Michael has got three months behind in house payments, the bank insists he pay the whole loan off by midnight Friday or lose the house, thus giving the story a ticking clock device for the day to be saved.

And then along comes Mary Poppins. But does she really save the day? That’s something you might find yourself asking. Thanks to a rather late appearance by a beloved actor from the original, you realise the screenplay by David Magee (Finding Neverland) has a bit of a flaw if you’re going to be nitpicky about cause and effect. But let’s not be nitpicky. Mary and her talking parrot umbrella bring back the magic and wonder into the Banks family’s lives and it’s a lot of fun along the way, weaving in iconic elements from the first film, particularly to do with flying kites.

The film, shot by Australian cinematographer Dion Beebe (Into The Woods, Chicago), looks handsome and has a couple of signs that it’s been made in 2018 – such as a few non-white people on the screen. Screen luminaries such as a very funny Meryl Streep, a surprisingly villainous Colin Firth and Angela Lansbury are along for the ride. It all ends with a rousing and delightful crowd pleaser of a musical number that, just like the original, is tinged with melancholy because (not quite a spoiler alert) we know that once Mary Poppins has done what needs to be done, she must be on her way.

Vicki Englund is a freelance screenwriter, journalist and writer