Cate Blanchett has joined a stellar cast of judges for a new round of the Hope Prize awarded to a short story exploring resilience amid poverty in Australia.

The writing competition is run by the national welfare group Brotherhood of St Laurence to challenge common stereotypes of what it means to be poor and disadvantaged in an otherwise prosperous country.

The Brotherhood has also signed up author Kate Grenville and former Governor General Quentin Bryce as judges. It will be a sequel for the trio who first came together to judge the inaugural Hope Prize for the welfare group in 2016. 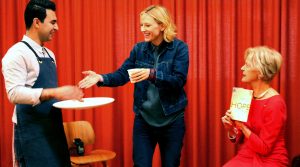 Farah Farouque, from the Brotherhood, said using the medium of short stories, which could be based on fact or fiction, had proved to be a great way to reach new audiences.

”When we ran the competition for the first time we were overwhelmed by close to 1000 entries and the winning short stories were published in an anthology appropriately called ‘Hope’.”

“Through the Hope Prize we want to find evocative new voices and champions to explore social issues that deserve more focus.”

The competition is supported by philanthropy and the winning story story will be awarded $10,000.

In addition, two Women’s Writing Career Development Scholarships, valued at $5,000 each, will also be awarded.

For further information on how to enter and competition rules click here.