Michael Griffiths – By Request is fun for the asking. Performing for a short season in Le Cascadeur before moving on to another show with Carlotta, and then back to GC duetting with Amelia Ryan for the Newton-John and Allen tribute, Livvy and Pete, Griffiths is having a busy Fringe.

And it is not surprising. He is a very winning performer, versatile, funny, and loaded with talent. By Request, by his own admission is a more free-form event where he plays favourite tunes, does audience requests and reminisces about his now 20 year career. Griffiths talks about his adventures in Australian music theatre – beginning in Adelaide and then in Shout, Priscilla, Queen of the Desert, and the Cole Porter tribute show which took him to Broadway. He’s a droll commentator about himself and work – and modestly omits to mention that he took out the Best Cabaret Performer Helpmann Award in 2016.

He opens the set with Barry Manilow’s Copacabana (At the Copa) reminding us in the delivery what a well-constructed song it is. And, he drolly notes that the story of Lola’s declining fortunes in cabaret is “a cautionary tale for performers !” Accompanying himself on electric keyboards with support drum and bass back-up from “Josh and Felicity” Griffiths is enjoying the loose format and the immediacy of the venue. On preview night he’s still adjusting to the technical set-up and performing – as he drily notes – “in a tent”.  But that only adds to the spontaneity. He has the all-ages crowd swaying on the bleachers as he belts out ABBA’s Knowing Me, Knowing You – delegating vocal call and response to the front rows but jealously guarding for himself what he calls the Agnetha bits. A brisk take of Take on Me, the hit from Norwegian pop-synth 80s band, A-ha, is enthusiastically taken up by sections of the audience – praised for soaring with the Morten Harket high notes.

Griffiths switches genre with Crazy Little Thing Called Love, the Elvis Presley or Queen hit (depending when you came out of the egg). That was a request for Colleen. But not a jukebox called-out from-the-crowd request, a prior on-line, via Facebook arrangement.

Borrowing sunglasses to deal with the last of the Adelaide sun streaming into the tent, Griffiths takes time for some fan gossip about Elton John and an assured reading of Your Song. He makes it look easy to flip from Elton John to Credence Clearwater Revival (Proud Mary–  requested by Peter) and then a very zippy version of Can You Forgive Me ? (for Tracy). Less stage production razzmatazz than the Pet Shop Boys perhaps, but very acceptable all the same.

Earlier in the show Griffiths had referred to a request from someone named Banjo the Wicked. Now it’s the time for the Peter Allen number. Not Tenterfield  Saddler,  Griffiths apologises – and adds smoothly : go to the Livvy and Pete show for that one. Is Banjo the Wicked in the audience ? he enquires. He’s our dog, a woman calls out from the back. For Banjo he sang Don’t Cry Out Loud – and the audience swooned.

Then some Kylie Locomotion to speed things up. But, since Griffiths had been having too much fun conspiring with the crowd, no time for a Cole Porter number. Love is in the Air to finish – with a touch of JPY and a great deal of Michael Griffiths élan. Who knows what happens on other nights. Does Banjo the Wicked get to make any more requests ? There are a few nights still to go. It’s well worth going to find out .

Berlin-based company Analog began making their gritty, no frills brand of circus in 2013 and in many ways they are reminiscent of the punk pranking in the early days of Australian companies such as Circus Oz and Rock and Roll Circus.

Led by founder Florian Zumkehr, Analog as their retro name suggests, have an “express aim of removing all artifice”. They are (to quote from their company statement) “characterised by authenticity, high technical ability and direct interaction with the audience… Entirely raw and naïve.”

On first night at The Peacock in the Gluttony precinct in Rymill Park, Analog opens with Zumkehr (Flo), in a scruffy Beckettian coat, clowning about with funnyman acrobat, Richie Maguire and doing some precarious balancing on a plank perched on a chair. Lucas Thielecke has also arrived on stage beating a tin drum -before setting himself up for the night behind the drum kit he expertly drills in skilful unison with the live action. Swedish performer Manda Rydman performs her aerial ring routine with panache, as Flo plays a slow drone electric guitar and a piano track is looped in. By now, singer and sometimes-compere Eva Wild, the mysterious diva in an enormous floppy hat, begins to vocalise in response to the spinning aerialist. There is a smoke machine and pulsing lights, the effect is improvisational, spontaneous and whipcrack precise at the same time.

Attention shifts to some stacks of books on top of which Zumkehr places a chair for more gymnastics, followed by a one- armed handstand on a tower of hardbacks that threaten imminent collapse.

Maguire comes back to introduce a new craze that he says will replace Planking. He calls it Van Damming, and it involves him being hoisted in the air with one foot on the rigging and the other stretched as near to full splits as is physically credible.

Demonstrating his skill on the thick hoop-like cyr wheel, Ole Lehmkuhl oscillates and spins until he is bouncing cruciform against the stage and up again while Eva Wild, in one of many costume changes, this time into a be-jewelled jacket, sings sultry jazz riffs and the other performers line up behind the drums like back-up vocals  in a recording session.

The show is called Finale because the company want every segment to have the intensity of a big closing finish – and it delivers on the promise. Bertan Canbeldek’s impressive juggling act, using iridescent orange balls bounced on a glass platform with a mic under it to amplify the sound, is in tight sync with Lehmkuhl’s drumming. It is hypnotic to hear and behold. Pole specialist, Carlos Zaspel’s  gravity-defying descents while Eva Wild croons through a loud hailer are another audience winner.

Analog keep amping things up. The hoop diving section is fast and furious with Maguire especially intrepid. The music pounds, the lighting richochets through the stage fog and this lively crew of performers round off their show with a cascade of glitter and confetti and an exhilarated ensemble farewell bow. The Finale finale is yet another highpoint. The raucous audience response says it all.

At The Peacock, Gluttony until March 16

Circus Abyssinia has an intriguing history. It was founded by two brothers, Bibi and Bichu, who had high ambitions to join the circus. But in Ethiopia, their home country, such opportunities did not exist. Discovering their love for juggling, they developed their skills as street performers in their home town, Jimma.

By 1998 they were part of a touring company visiting the Brighton Fringe. They returned to live in the UK the following year, training at the National Centre for Circus Arts where they met their mentor Sean Gandini, founder of Gandini Juggling, whose brilliantly weird Pina Bausch tribute show, Smashed amazed audiences at the Adelaide Fringe four years ago.

Much has happened for these enterprising men. They continued their connection with Gandini and became regulars on the festival performing circuit. Since 2010 they have also sponsored Wingate Circus school back in Addis Ababa and the project has culminated  in the formation, in 2017, of Circus Abyssinia which made its debut in London and followed with a sold-out season in Edinburgh.

2019 sees Circus Abyssinia return to Adelaide for a second time and this year’s show is brim with energy, verve and astonishing skill. Opening with the company’s creation story – two young jugglers representing Bibi and Bichu dream of joining the circus, the stage is soon filled with acrobats in brightly coloured patterned costumes setting up for a series of hand vaulting routines. Except the word routine does not describe the dexterity and confidence of this troupe as they backflip on each other’s shoulders, or pressed hands from which they are catapulted to the next pair of handlers. It is dazzling to watch the momentum – as the bass-heavy Afrobeat music and the rich tinted lighting completes the experience. 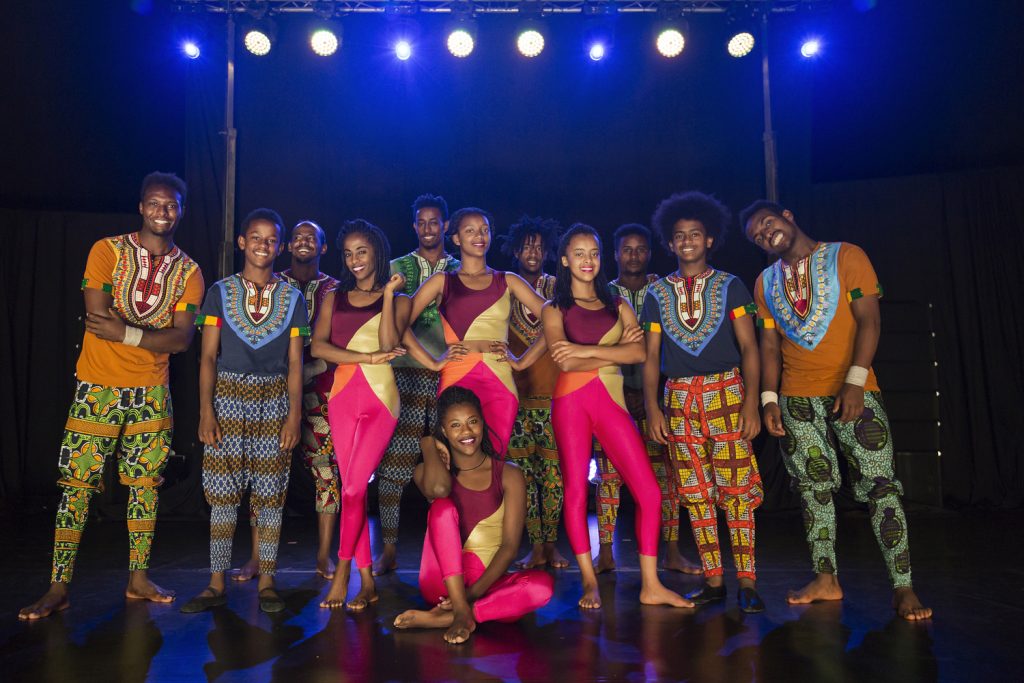 Two young women in snake-like body stockings then begin a series of contortionist displays of ever- increasing complexity and they literally turn themselves inside out, balancing on each other and redefining the meaning of the word supple. Male acrobats return with a series of skipping tricks which multiply in what seems like infinite permutations as the display progresses.

Many of the classic high performance circus turns are included here. The Chinese Pole work – twin poles, with six and then eight acrobats, astounding in their speed and intricacy . Four women spin woven discs on their fingertips and toes in a balletic balancing display. A brilliant hoop dancer adds increasing numbers of rings to her demonstration of perpetual motion, until she is swathed in hoops almost too heavy to keep spinning.

The men return with floor mats and a hoop diving routine consisting of two lots of triple hoops on top of each other through which they swoop and weave with alarming precision.

Bibi and Bichu perform their extraordinary juggling duet, moving the spinning skittles between and around and above each other with mesmeric aplomb. As with all of the stunts the degree of difficulty is wound up to around eleven.

And perhaps most unforgettable are the women contortionists, returning to out-boggle us as they manoeuvre their re-threaded limbs on to a tubular frame which enables them to balance in a way that is too improbable to explain.  This is extraordinary, irresistible circus.

At The Peacock, Gluttony until March 17